We have a wide variety of mikes available, but the majority of our acoustic recording work relies heavily on a single mike pair. Here are some sample configurations:

A Jecklin disc, consisting of two 1" B&K measurement mikes. These mikes have response flat down to 2 Hz, and modified preamplifiers with very low distortion. The Jecklin configuration provides very good off-axis response, meaning that the tonal quality doesn't change across the field of pickup, so when miking a large orchestra, the instruments at the edge aren't colored in sound. Also this results in less coloration to the room sound itself, and more realistic pickup. 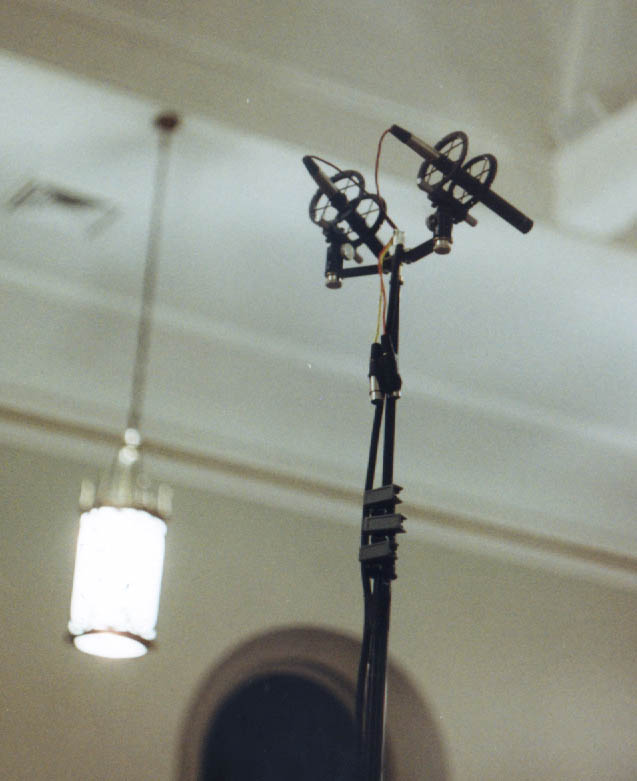 This is a near-coincident cardioid pair of Josephson 606 microphones, which have a very tight hypercardioid pattern and very smooth response off-axis. This configuration does not give as good low end response as the omnis with a Jecklin baffle, but it is much less sensitive to acoustical problems in the hall and is very effective in more reflective rooms or rooms where the Jecklin system would be impossible to place.

We have a number of figure-8 ribbon microphones, from the common RCA 77DX to the Shure 300s which are pictured here. The Blumlein configuration has a very narrow angle of acceptance and therefore pick up very little room ambience. Because the figure-8 mike has a very tight null, they can be placed to eliminate slap echo problems in soome rooms. The Shure microphones pictured are less sensitive than the more popular RCA ribbons, but they have a much cleaner high frequency response.

In the kit, some of our favorite tools are some hotrodded Crown PZMs, including one pair modified to employ B&K 4034 capsules, which has found use in several environments with very poor acoustics where more conventional mikes would have been impossible. In addition we have a number of standard stage mikes for PA use which have very tight patterns or specialized patterns for live multitrack concert recording.

We have all of these because our job is to get the sound that you want. We aren't about putting our own particular stamp on every recording. We want it to sound like the original concert as much as we can.